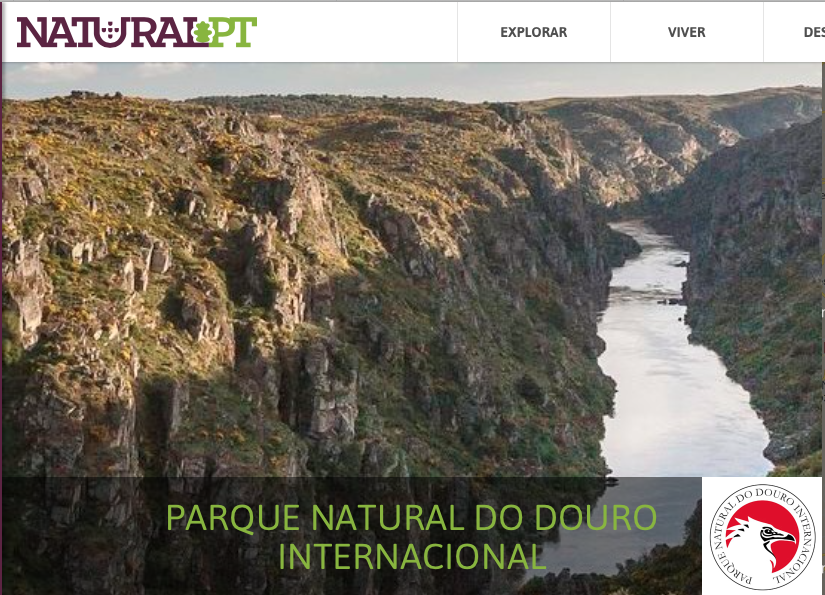 The Natural Park of the International Douro is a natural park that covers the area where the Douro River forms the border between Portugal and Spain, as well as the river Águeda, tributary of the Douro. Includes areas of the municipalities of Mogadouro, Miranda do Douro, Freixo de Espada à Cinta and Figueira de Castelo Rodrigo.

From a river of violent waters, the Douro, due to the dams, was made a vast and tranquil mirror of water imprisoned between ramparts, being notorious the contrast between the narrow throat where it runs and the waving of the adjacent surfaces.

The area of ​​the Park covers the frontier section of the Douro River, including its valley and adjacent planar surfaces, and extends southwards through the valley of its tributary, the Águeda River, for about 120 km.

The northern part corresponds to the zone of smaller Atlantic influence of Trás-os-Montes, being constituted by an extensive plateau, with altitudes that vary between 700 and 800 meters. Here, the Douro valley is quite embedded, with steep, essentially granite banks, the “cliffs”. As you head south, the valley is more open, with flat valley bottoms, the steep slopes remaining; there are still small planar areas and residual reliefs surmounted by quartzites. This area, where the valley already resembles the “Douro vineyard”, is characterized by its microclimate, with little precipitation and mild winter temperatures, being part of the so-called Terra Quente Transmontana.

The region is included in the area of ​​the oak forest – Quercus pyrenaica and Quercus pyrenaica oak forests, Quercus faginea, in the higher elevations and holm oaks Quercus rotundifolia and Quercus suber cork oak, in drier terrains. There are zimbrais and mudslides in the narrow valleys and rocky spurs of the Douro and its tributaries, alder groves, willows and ash trees along the water lines and large stretches of cytisus striatus and Cistus ladanifer stems.

Agricultural activity is extremely important in the definition of the landscape. The extensive cereal culture creates steppe biotopes, important for the avifauna and the habitat mosaic created by the marshes, vineyards, olive groves, etc., give this area a high biodiversity.

The fauna present in this Natural Park is distinguished by the number of species and their conservation status. In birds, the Milvus milvus royal kite and the black-tailed Oenanthe leucura are Critically In Peril; the Egyptian vulture Neophron percnopterus, the hunter-gatherer Circus pygargus, the royal eagle Aquila chrysaetos, the bonelli eagle Hieraaetus fasciatus and the red-billed crowbar Pyrrhocorax pyrrhocorax are in danger; the black stork Ciconia nigra and the Peregrine Falcon Falco peregrinus, among others, are Vulnerable. All these birds have their preferential habitat in the cliffs, except for the kingfisher and the hunter-gatherer that occupy the plateau. The reservoir of the Santa Maria de Aguiar dam, in the southern part of the Park, is the most important wetland in the whole northern interior and center for waterfowl, especially the Podiceps cristatus.

As for mammals, the Rhinolophus euryale-Mediterranean horseshoe bat and the little mouse-bat Myothis blythii are Critically Endangered; the wolf Canis lupus is in danger; the bat-teddy Miniopterus schreibersii, the cabrera-rat Microtus cabrerae, the wildcat Felis silvestris, among others, are Vulnerable. In the Park and surrounding area there are some shelters of creation and / or hibernation of cave bats with national importance.

In the group of reptiles, the carapace-striated tortoise Emys orbicularis is In Peril and the horned viper Vipera latastei is Vulnerable.

The houses are concentrated, surrounded by cultivated fields. The forest is scarce and a band of uncultivated accompanies the steep river and its tributaries. Cereal crops predominate in planal areas; the marshes occupy the lower and wet areas of the valleys. In the cliffs, Mediterranean cultures predominate – the vineyard, the olive grove, the almond grove, the orange grove. Native breeds of sheep are created, Churra Galega Mirandesa and Churra da Terra Quente, and bovine cattle, Mirandesa cow. The pigeon, housed in the traditional pigeon houses, is part of the farmer’s diet and enriches the land.