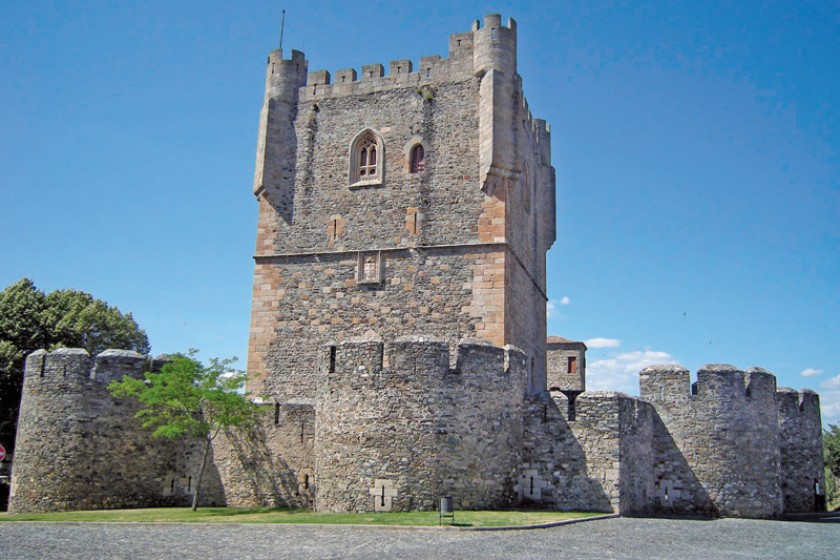 What to know when visiting Bragança Castle

The Castle of Bragança is located in the parish of Santa Maria, in the historical center of the city, county and district of Bragança, Portugal.

It is there, in Trás-os-Montes, in the extreme northeast of Portugal and on the banks of the Fervença River, that this is one of the most important and well preserved Portuguese castles.

History of the Castle of Bragança

The urban growth of this transmontane city is closely linked to Bragança Castle.
The initial perimeter of the brigantine citadel defended the old medieval town, but the urban mesh began to extend beyond the walls, in such a way that Bragança would eventually be elevated to the category of city.
However, the strategic situation of Bragança had already been used for the construction of a castro, which was later metamorphosed into a Roman fortification, where important military road networks were monitored and controlled.
Having been restored the name of “Brigance” after the arrival of the Germanic peoples, this city of Transmontana knew the uncertainties and the conflicts between Arabs and Christians.
t was due to these devastating incursions that the town had to move to the hill of Benquerença, near the river Fervença, which occurred during the reign of D. Afonso Henriques.
From the demolished “Brigade” were recovered and reused numerous ancient materials, building in the twelfth century a beautiful castle that would serve to protect the renewed settlement.
However, a few years later, the village of Benquerença would again be devastated by the Muslim armies.
King D. Sancho I of Portugal ordered that they repopulate and rebuild houses and fortress with such success that in 1293 D. Dinis would add to the village a second cloth of protective walls.
The Castle of Bragança would be the target of works of improvement during the reign of D. Fernando, whereas, in the reign of King João I, it was enlarged.
Already after the struggles of the Reconquest, Bragança continued to register important military actions against its medieval castle. Several border disputes between Leon and Portugal continued to occur in the thirteenth century, leaving much of the defensive perimeter of Burundi destroyed.
In the reign of D. Fernando, the struggles between Castile and Portugal eventually led to the siege and occupation of the citadel of Bragança, which only returned to national hands after the signing of the Alcoutim Treaty.
Later, with the marriage of D. Afonso, son of D. João I, and of D. Beatriz, daughter of D. Nuno Álvares Pereira, the famous House of Bragança was begun and the city would be umbilicalmente attached to this important one lineage of the Portuguese nobility.
In 1580, during the crisis of succession, Bragança remained faithful to the national cause, supporting the ill-fated D. António, Prior of Crato.

The Military Attacks on the Castle of Bragança

The destruction continued with the Spanish invasion of 1762, and this conflict eventually led to the overthrow of part of the Brigades’ defenses.
With the Napoleonic wars, a new series of mutilations and looting took place that struck the people of the Transmontanes. Thus peace would only come during the twentieth century.

Characteristics of the Castle of Bragança

From the great and imposing profile of the medieval Castle of Bragança is witness to its magnificent citadel. The first wall fence is transposed, under the silent watch of the two turrets that are next to the Port of Santo António.
Access to the old village is done by the ogival Porta da Vila. The walls are reinforced by cubes and towers, highlighting the beautiful “Tower of the Princess”.
Inside the square of weapons can be seen the adaptations of accesses and platforms for the introduction of modern artillery.
Further south are the high cloths of the second wall, which is surmounted by large merlons and adarves, as well as various openings for artillery pieces.
Already in the last stronghold, it is to emphasize the magnificent Tower of Homage, well proportioned and harmoniously conceived.
Gothic military art made it endowed with important defensive systems, such as cross-hatched battlements, dog-corner counters and misled angular coasters.
In the interior can be observed rooms covered by edge vaults reinforced by arches torais, prison and cistern.
The surprising internal spaces of the Castle of Bragança were reorganized and converted, since 1936, into military museum of the region.