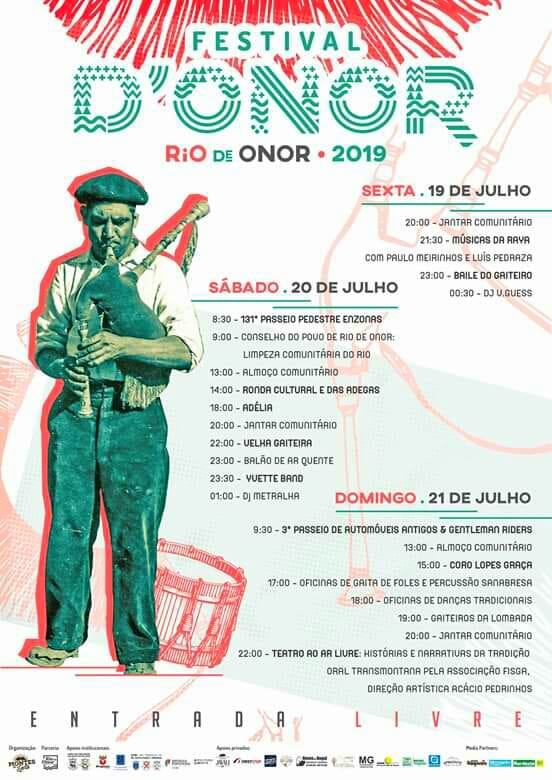 Event, which had the participation of the entire population of Rio de Onor in its organization, starts tomorrow and admission is free for the three days of activities.

The D’ONOR Festival, which starts tomorrow and lasts until Sunday, with free admission to all activities, aims to boost and disseminate the material and immaterial heritage of Rio de Onor, one of the 7 Wonders of Portugal, as well as uniting generations. For three days, the project, developed in partnership with the local population, “will bet mainly on a festival as an experience, with several novelties in relation to previous editions”, says Montes de Festa, the association responsible for the initiative.

The third edition poster presents several new features, with the opening scheduled for tomorrow night, at Portelica Square, with Música da Raya, “a musical journey through the history of the cross-border relationship between the two Iberian countries and the relationship between their songs” , starring Luiz António Pedraza (La Musgaña, Spain) and Paulo Meirinhos (Galandum Galundaina, Portugal), two of the most respected folk musicians in the world. To close the first night, the Baile do Gaiteiro, a recreation of the old dances of the village to the sound of the bagpipes, and the performance of DJ V’Guess.

On Saturday the People’s Council will be recreated, a former meeting with the village masters, inviting visitors to participate in the cleaning of the river banks together with the people of Rio de Onor. Also on the second day is the 131st Pedestrian Walk Enzonas, in the heart of the Montesinho Natural Park, with a visit to the largest specimen of Oak Negral in Europe, 23 meters high and about 20 meters high. Ronda Cultural e das Adegas, Adélia concert, musical project by two brigantines with roots in the traditional Portuguese songbook, Velha Gaiteira and the Yvette Band are part of Saturday’s activities, whose day ends with the performance of Dj Metralha. During the night it will also be possible to participate in captive hot air balloon flights.

On the last day of the festival there will be the 3rd Tour of Antique and Sports Cars, the performance of the Coro Lopes Graça in the parish church of Rio de Onor, free Gaita de Fole, traditional Sanabrese percussion and traditional dances. The festival ends with a street that will count with all the participants and the Group of Pipers and Players of Lombada and an open-air theater session, with the play “Histories and Narratives of the Tradition Oral Transmontana”, of the Fisga Association.

In addition to the various activities, gastronomy will be one of the strengths of the event, with typical dishes from the region at affordable prices.

Enjoy and stay in one of our homes. Make your reservation here.